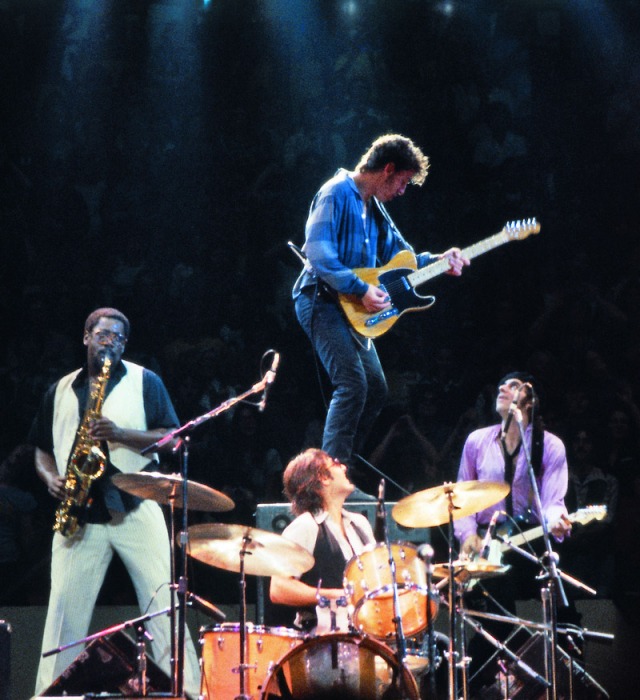 36 years ago, from September 19th to 23rd, 1979, the five No Nukes concerts took place in New York City, at the Madison Square Garden.  The shows were organized and launched by MUSE, aka Musicians United for Safe Energy, an activist group founded by Jackson Browne, Graham Nash, Bonnie Raitt, Harvey Wasserman and John Hall. The group advocated against the use of nuclear energy, forming shortly after the Three Mile Island nuclear accident in March 1979.

I think that the TV recorded Bruce performances of those nights put most of the people of my age for the very first time face to face with his enormous live power; the sequence of his Quarter to three closing encore alone shows a transcendental experience on that stage, the real, inner soul of what a rock’n’roll concert is (or should be): music played like the instruments are on fire, energy that drags the people along with you, passion so strong for that rhythm that you just can’t do anything else but jump up and play, sing, shout, dance, in a word, feel alive, and happy to be there.

The two concerts that involved Bruce’s performance were different, and the reason was Bruce himself, of course. The first show was one of the faster sellouts in the history of the Madison SquareGarden. The audience was mainly a Springsteen crowd, with little patience for preliminaries. On Friday, Jackson Browne himslef did a shorter set than the usual, on Saturday Peter Tosh, happily performed twenty minutes of reggae, then Tom Petty, who rocked hard but seemed a little taken aback by the size of the stadium. That was a tough audience to crack. On Friday, Chaka Khan left the stage fuming, because she misunderstood the audience’s screams for ‘Bruuuuuce!’ and thought they were booing her. In fact, every performer that night was besieged by a very vocal crowd “Bruuuucing” it up every second prior to the Boss taking the stage.

What was Bruce doing there? One condition that he set before agreeing to perform was that no politicians be on the program. He was the only musician who did not released a press statement to explain his reasons for joining the antinuclear movement. As Landau laid out: “Bruce felt that a statement wasn’t appropriate – the music was enough”- adding that Bruce agreed to play this shows only after learning the money would not go to any political candidate.

That’s a bit of conundrum: the reason these concerts were also a financial success was actually Bruce, he had the kind of drawing power in the audience that would sould out an arena for two nights in a row (Friday’s Springsteen concert was actually the only sell-out of the five shows). But with Bruce Springsteen on the program, the political nature of the concerts was lost in a way: his crowd, younger and crazier than the Nash or Browne followers, did not particularly notice the antinuclear theme. For instance, to sell the programs, all the vendors held the books open to the Springsteen page, and that alone guaranteed the sale.

When Bruce arrived on stage, the first moment was a bit tense: it was his first performance in over a year, but as the set unfolded (it was a short one for him, about 90 minutes) he loosened up. The crowd was his, fans on their feet, standing on chairs from the first note, shouting and singing the words to every song.  The MUSE main artists had been searching all week for the right connection, the shared feeling to get at the audience. Bruce, as always we can say, did not have to search for the magic of it: he walked onstage and it was there.

It was during this two-night run that Bruce introduced his new song “The River,” which would become the title track to his yet-to-be released double album of 1980, and shared a very nice version of Stay with Jackson Browne on stage, and great singing of Rosemary Butler. These shows were killer, Bruce and band were in top form, a lighter theme, maybe, than some of the other artists.

Still, it’s a thing of beauty to sit quietly as Crosby, Stills and Nash sing the same songs they performed at Woodstock, or as Jackson Browne’s version of ”Running on Empty” highlights the concert.  It seems that some things never change, in rock’n’roll poetry.

The MUSE concerts were unique for the time, because they were organized and presented by the musicians themselves (not their agents or record companies) in partnership with hard-working, low-profile activists. The audience was friendly and enthralled: back then, the connection was easy, if you were into Hendrix and the Doors, chances were you felt a certain way about the Vietnam War and politics, and about government’ choices on nuclear power.

Jackson Browne and the others members of MUSE, Bonnie Raitt, John Hall and Graham Nash performed tirelessly and selflessly, also organizing the hard work that comes with a non stop event of 5 shows of this range. The Doobie Brothers, James Taylor, Carly Simon, Ry Cooder, Tom Petty, Peter Tosh and Bruce Springsteen, among many others, devoted their efforts and sacrificed commercial opportunities.

In the end, it was the largest, most impressive gathering of musicians ever assembled for a non-profit event (up to that time), and it was a stunning testimony to the depth of the shared beliefs of the generation that had grown up in the Sixties.