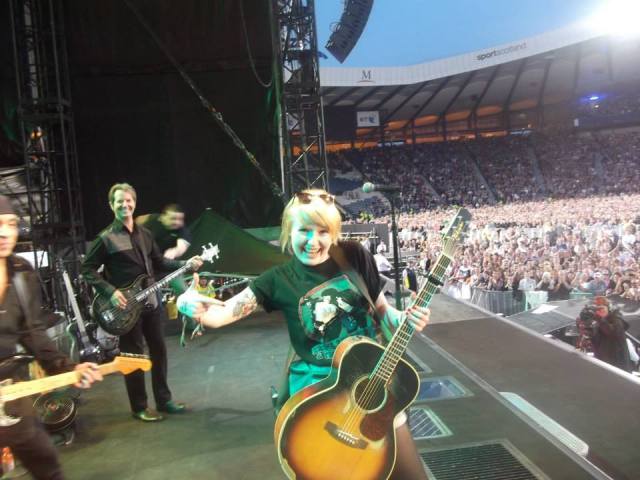 Well it was in Glasgow, my 20-somethingth show (not bad to say I was 20 at the time!). I’ve grown up with Bruce really – I first saw him with my mum, dad and brother when I was only five. I’ve always been very very fortunate at Bruce shows but it was obviously my dream to be on that stage! The day before we made the journey from Sheffield I decided I was making a sign! Mine said “Can I dance with Jake please?”. It was worth a shot, right? As soon as those first bars of DITD played, I threw my sign up in the air. There were some great signs around me (one said “I got married yesterday – please can I dance with you?!”) so I didn’t rate my chances really. My mum told me half way through the song that Bruce had clocked my sign but I didn’t believe her at all! But suddenly, Bruce was stood in front of me, asking me to come on stage! I’ve never run as fast as I did to get up there! I think the excitement of it all took over because I couldn’t stop dancing, no matter how tired I got! It was amazing to look out into the crowd and see people that I’d met nearly 15 years before at Bruce shows. After a few minutes of dancing, Bruce came over to me and told me he was gonna get me a guitar – I thought I’d died and gone to heaven! I was living the dream! I had my camera in my hand and didn’t know where to put it so Bruce took it off me and took a photo of me – with his guitar! I’d jokingly said to my mum all day “when Bruce gets me up, I’m going to take a selfie with him!” So of course I had to once I was up there! I don’t even know how I didn’t faint! I think the adrenaline definitely took over. When the song ended, I ran back to my family and sobbed for the rest of the show! Bruce has always been a hero of mine and I don’t think anything that I do will ever top that! Best day ever! 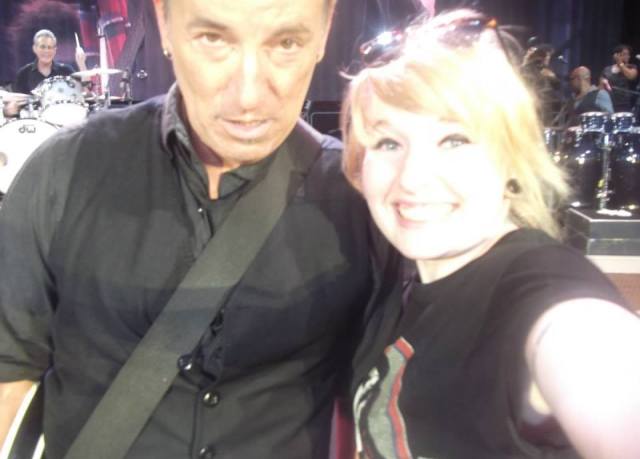 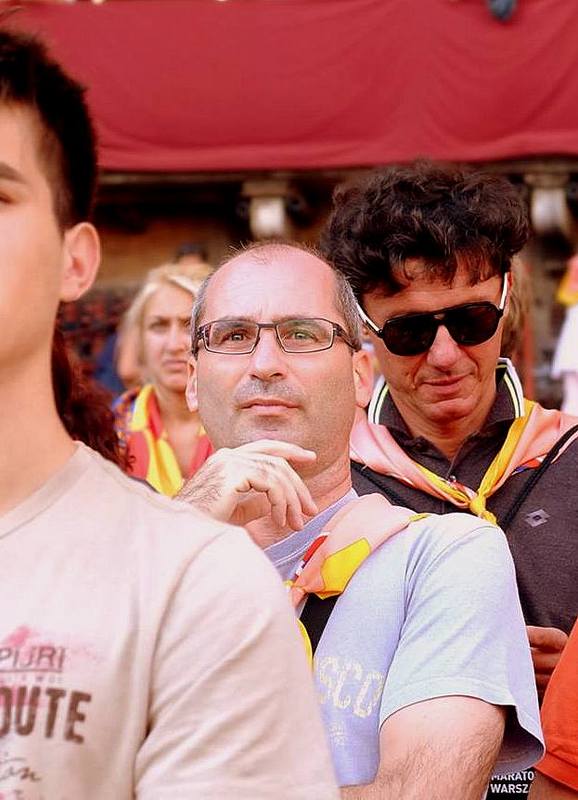 Of course an opportunity missed is an opportunity lost. Of course you wanted to be at that other show, the one where he played that one song. But this one, this show you are living, this concert is an opportunity not to be missed, and you didn’t. You just have to look around you, see all the people happy, smiling, singing…they don’t want to be anywhere else in the world. Of course it would have been fantastic to go to St. Louis or New York or London or Helsinki, because each show is magic, and every note has been played, as usual, as if it was the last note played on earth. Of course Bruce and the band played with no mercy. And of course tomorrow he’ll play something else, he’ll maybe play more, or even better. Still, you are living this concert, and you’ll have something unique from this show that will always be with you, and no one else will have. This song, this moment will live with you for a long time, and you have been given a priceless gift, a memory of happiness with your friends, or family, and of course, with your soul mate rockstar and band.

You know that moment just at the end of the show, a moment that lasts about 10/15 minutes, you are completely stoned, everybody around you greets you and smiles and laughs and says something like OH MY GOD and you have flashbacks of each and every minute of the show and the security is pushing you outside but still at the end of the field you turn to look at the stage which is packed with the crew and the roadies now but you still semi-hope he’ll come back to play one more song… That moment.

A moment in a Bruce show you’ll never forget

Now I’m going to spare you the details of how that was my first Bruce gig (not to mention my very first Rock Concert ever) and yeah, some #rocknrollbaptism I got.

I want to spare you all the same old stuff about how much I had dreamt of the day, since first becoming enthralled as a teenager with his Live 1975-‘85 —  my first Bruce and the one I knew by heart from obsessive listening.

I’ll also spare you my missing the 2003 San Siro date out of effing shyness (although, perhaps, this I’m omitting out of deep deep shame) and the 2007 Assago night despite a desperate late attempt to tickets.

And I’ll spare you the joy, the packed stadium, the widespread excitement, the dream-come-true feeling I was pervaded with on that Wednesday night, June 25th, 2008, when I was there.

Having spared you all that, I can swiftly come to the point.

And me, I was waaay up on the second floor. He looked tiny in the distance. Bruce came onstage and I remained breathless for a good minute or more, repeating to myself and to my friend next to me: «I can’t believe he is there, he is real, he REALLY DOES EXIST». Then he spoke Italian, and I melted.

As he opened with Summertime Blues I was still enchanted with his presence and at the same time struggling between recognizing the song, concentrating on his every movement and accent so to record even the slightest detail, and just letting myself go and dance… This excruciating moral dilemma slowly evolved to choosing the last option as songs progressed to Out in the Street (and that «Andiamo, Milano!», like it was a matter of life or death), Radio Nowhere and Prove it all night.

I was already on the n-th cloud, but I had no idea of what was coming to me.

And it’s hard to put to words, but you know it when it happens to you. It’s that little something that might… that could… you know what it can do if you let it.

That one, long blow in the harmonica. The Promised Land.

My heart bloomed in my chest. I felt home. That, was the moment.