Bruce in his prime, incomparable 🙂

She has parents! She has religion! She has sisters! and the heart of a ballerina.

Today’s anniversary is the release of Greetings from Asbury Park, NJ: January 5th, 1973, Columbia Records, 42 years ago. Oh boy. There’s no better way to remember such a work as to dive deep into the words of the great Lester Bangs: “Bruce Springsteen is a bold new talent with more than a mouthful to say, and one look at the pic on the back will tell you he’s got the glam to go places in this Gollywoodlawn world to boot. Watch for him; he’s not the new John Prine”.
The whole mighty review by the greatly missed Lester Bangs is here:
http://www.rollingstone.com/music/albumreviews/greetings-from-asbury-park-nj-19730705

It was a cold Thanksgiving night, me and Clarence and Steve we were driving down this old back road going to Hank’s Turkey Farm to steal some turkeys, this was way back, we didn’t have no money, couldn’t buy no turkey ! we’re looking trying to find this place…and then just as we figured we’re just about up to it, we get a flat tire, the rear end, right tire…and so Clarence and Steve, they climb in the front seat… ’cause there’s no streetlights, it’s real dark…and we’re hearing all these turkey sounds coming out of the woods… is that turkey sounds? and…we’re trying to decide who’s gonna get out and fix the flat…I’ve been, I’ve been afraid of the dark, I still sleep with the light on, I’m not gonna go out and fix it. And so we decided we’d figure it out the American way, we would gamble to see who’s gonna go out… but we couldn’t do it, had one too many guys, couldn’t choose up…so we’re trying to think, well, we’ll figure this out the democratic way, number one, I’m the Boss, I don’t have to get out now!  number two, Clarence is a lot bigger than Steve, he don’t have to get out, just as we had Steve’s head and upper torso forced through the window  just like in that movie “Close Encounters of the Third Kind,” this big light came flashing down from out of the sky. I stuck my head out the window, I looked up and there was this big cherry-red flying saucer with long Cadillac fins and on the side it had printed “Little Melvin and the Invaders – we play weddings, parties and bar mitzvahs”and this guy sticks his head out the window, he looks down and he says “Hey, can any one of you guys tell me the way to the New Jersey Turnpike?”  now…we’re not as dumb as we look, you know, we’re not gonna give out this kind of valuable information for free! so we sit there, we start thinking, we said “Hey, Mr. Spaceman, we’ll make a deal with you, you gotta give us each one wish, one wish and we’ll tell you how to get back to the Turnpike”

And so he says “Ok, that sounds pretty fair” and first Clarence got his chance to wish, had to think real hard about this: as usual, he wished for his boyhood dream,  a combination, Laundromat and pizza parlor on the corner of downtown Asbury Park. That’s good you know? you can wash your clothes, you can eat at the same time! and nobody’s thought of that yet. In a few years you’re gonna see them all over!

and then, then it was Steve’s turn…you can’t have the spaceman wish for that… I don’t know what the hell his wish was, I forgot! but then it came my turn!

Now…I was thinking real hard…and I remember it was real quiet and I didn’t even, I didn’t even get a chance to say it out loud…I was just thinking it in my mind…and way over in the dark, in the dark side of the highway, I seen what I was wishing for…slowly, slowly start to appear… (lights goes out and there’s a spotlight on his Fender guitar – crowd cheers – and he takes it in his hands)…and let me tell you, man…when we touched…” 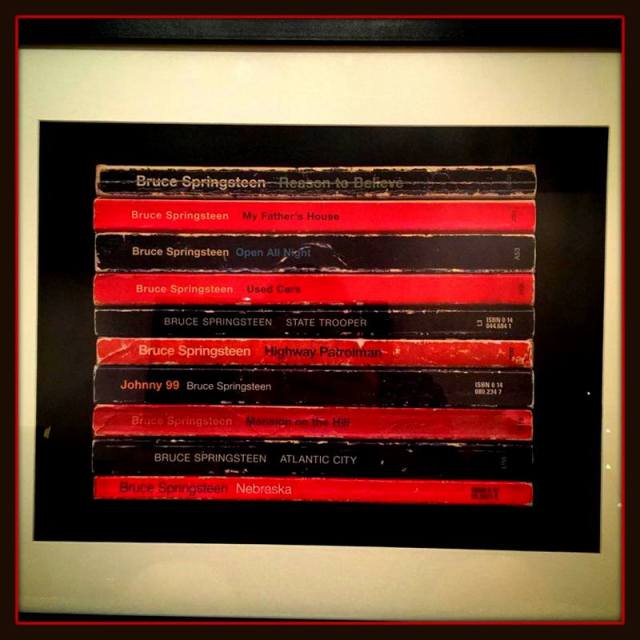 So I had a great final day in my role. I asked for no leaving card or gifts as I just hated it so much. I took two of my closest colleagues for dinner and they had purchased this for me, now it’s on the wall in my study. After my struggle for a year to change position, it’s interesting they chose Nebraska.

Anyway, I have to say that as a Team Leader there is far more talk about processes and nowhere near enough talk about our teams. Today I have had someone come over and say I changed their life, another close to tears over some fantastic news I supported with and a couple thank me over my support with health issues and worried about me leaving. Team Leader – the clue is in the title ! It makes me proud to have had a modicum of influence on my teams life and have been there for them.